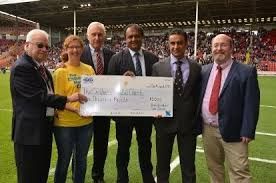 The used car dealer, based on Herries Road, raised the money throughout last season with an initiative to celebrate the Club’s 125thanniversary that saw the firm donate £125 for every car they sold in a week when Sheffield United won.

The cheque was presented at half-time in United’s opening home league game of the season against Chesterfield.

The money raised will support the charity’s Make it Better campaign, which urgently needs funds to build a brand new wing at The Children’s Hospital in Sheffield.

The funds will help bring world-class facilities to the hospital, including three new wards with mostly private rooms and parent beds, a spacious new outpatients department and a giant play tower.

Tajinder Singh said: “We are very proud supporters of The Children’s Hospital Charity and it gives us great pleasure to hand over a cheque for £5,000.

“We are delighted that our Blades fundraising initiative raised this amount for The Children’s Hospital Charity and we now look forward to continuing our support of local charities again this season.”

“With just over a year to go until building work is set for completion, now more than ever we need help to bring these incredible facilities to Sheffield. The work will benefit the hundreds of thousands of children who come to our hospital each year from Sheffield, the UK and beyond.”