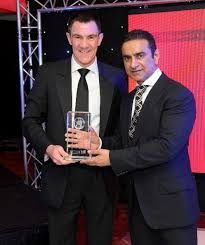 Winchester Car Sales were on hand to present a special Lifetime Achievement Award to Sheffield United’s Chris Morgan at the Blades’ end of season awards.

The glittering ceremony took place in the Platinum Suite and in attendance were manager Nigel Clough, his coaching staff and players.

He said: “It was a great honour to present the award to Chris Morgan, who is a club legend. Being a Blade myself, it gives me great pride to support the club and be a part of their end of season awards.”

A number of other awards were presented and the winners were:

The Sheffield Star’s Player of the Year – Harry Maguire