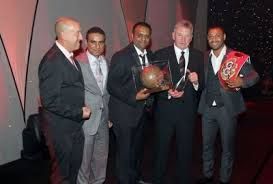 Proud to be at Sheffield United’s special evening

Celebrity guests, including playing and management legends, internationals, representatives of the football community and the current management and playing squad formed part of a sell-out 1,200 audience.

Tajinder Singh and Harminder Bains, directors of Winchester Car Sales, were on hand to present the award of United’s greatest-ever player to former England midfielder Tony Currie, who took the accolade ahead of Everton defender Phil Jagielka, after they were shortlisted from more than 1,000 stars who have played for the Blades over the years.

Tajinder said: “It was a truly wonderful evening and we were extremely proud to have been a part of Sheffield United’s 125th anniversary celebrations. It was a true honour to present Tony Currie with his award.”